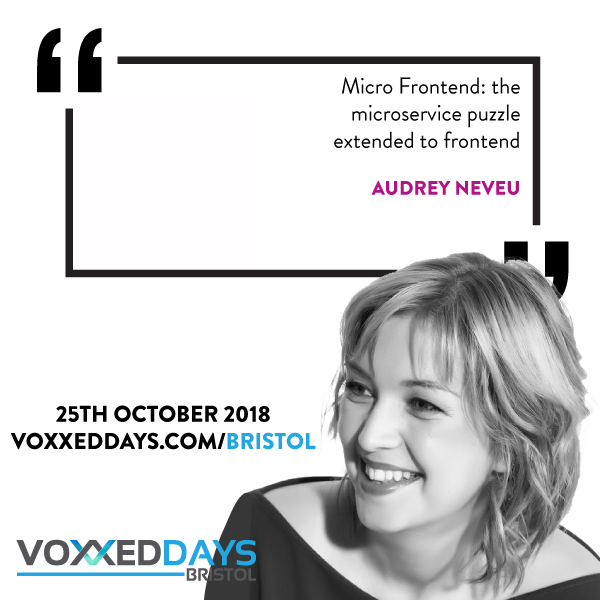 Can you tell us a bit about your background and how you got into software?

I’m a full stack developer (yep, I love both Java and Javascript. Can happen to anyone.) working for Saagie, a French startup. I’m also Devoxx4Kids France leader, member of Devoxx France volunteers’ team, and one of the Cast Codeurs which is a french podcast for / about / with developers. I’ve been lucky enough to learn programming with Logo at school when I was 8, and then to have a computer at home a few years later. But unfortunately I had to wait until 15 to have another computer course at school, which was about … Word and Excel. For someone who has spent the last two years hacking her computer, you can imagine what a disappointment it was… With nobody around me in computer sciences, no one at school to told me about the IT sector, it took me a little bit of time to get back into software, but this way I know how lucky I am to make a job I love so much!

Your session is about Microservices and Frontend. Are you expecting people to be like, “Whoaa, what’s she talking about”?

I totally expect that! Micro-frontend is a very interesting architecture topic, but still quite young. Some companies have figured out how to solve the puzzle in function of their own needs but no solution has emerged as ‘the’ solution, which is not really surprising because of the incredible amount of web technologies.

What was the inspiration for this session?

Saagie has started with a single product in 2013, then launched a new one four years later, and now we’re working on other tools to support the two others and give a more complete experience to customers. So it quickly became evident for us that those products need to be presented in a single interface, which was not an easy thing to do because obviously, all those applications were written with different frameworks. We’ve been working on that for six months, experienced two solutions and finally invented one that fits our needs. So the inspiration came naturally 🙂

You’ve been heavily involved in getting kids into coding – why do you devote so much time to that?

I’ve been one of those kids who suffers from bad school counselling and ended up stopping my higher education studies very quickly. Hopefully for me, everything went fine at the end because I finally have been able to find my way, go to a training for adult, etc… but I still think about all those people who perhaps have missed their calling today because of a similar experience when they were young. That’s the reason why getting kids into coding has been very important for me for a long time now. I don’t want all of them to become developers, I just want to break down negative stereotypes which are still attached to our profession (and to the ability of girls to code btw), and show kids that programming is fun, creative, rewarding and that it could be a great job for them later if they want or just be a very cool hobby if they prefer.

If you had a magic wand and could change one thing in the software development sector, what would it be?

Perhaps surprisingly I’ll not act on diversity, because people are really getting into the subject and I completely trust my peers to achieve that goal, even if it’s gonna still take a lot of time and effort. I would more likely use it to give to all software companies moral and ethic values. Software development is both extremely powerful and in the hand of a very small part of the world’s population, even if it has impact on everyone’s life. And it could achieve so many great things, it could even save lives! But at the moment we’re seeing companies working on war drones, agreeing to provide a censured internet to dictature, or just not caring about the way their tools are used to manipulate such important things as elections. I’d like those companies to stop building huge and closed empires on billions of private data or looking forward to be the first in attention economy’s class, and instead thinking about what does the world really need and how we, as developers, could provide useful and ethical tools to everyone.