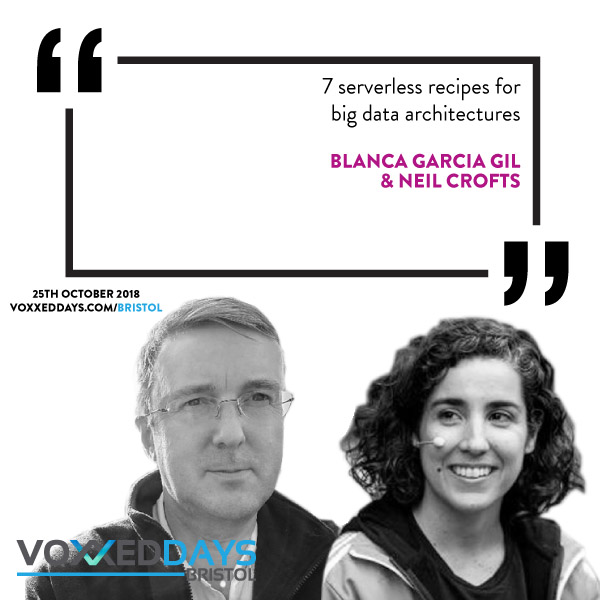 Blanca Garcia Gil is a senior software engineer at BBC. Her current work is focused on highly scalable big data pipelines. She is very interested in automation (testing and deployment) and observability. While having spent most of her time as a Java developer she’s also enjoys tinkering with Python and Bash when running data experiments.

Neil is a Senior Software Engineer in the Audience Platform Data team responsible for processing and analysing the billions of messages audiences create when interacting with BBC online services. Previously I worked with XML based technologies on the BBC Red Button Digital Text service.

Can you tell us about yourselves?

We’ve been colleagues at the BBC for about two years working in the big data space. We’re from very different backgrounds but share common values and that seems to make it easy to collaborate.

Your session is a kind of war story, sharing some of your development battles and your victories in moving to a serverless architecture. What inspired you to lift the lid on this?

To be blunt we were very frustrated with the state of the system we inherited. It wasn’t in a great place and we were tired of negative issues around it, so thought it would be good to start telling others about some of the progress we’d been making as we moved into the serverless space.

What are the key things you expect attendees to your session to takeaway with them?

You’ll get to understand about the scale of our challenges and that serverless isn’t just for micro service and web architectures, it can work really well in the big data space too.

You are fairly new to speaking at conferences, and you’ve had to commit a lot of time and effort to sharing your experiences. Is it worth it?

Yes very much so. We’ve put in a lot of time, more so because we are joint speakers. We have had to plan ahead with timings, and agreeing on things. It’s been far more fun to do this together, and the discussions have been very fruitful. It feels worth it because as a result we have learnt about a lot of aspects of the project. While we were preparing the talk we identified areas we didn’t know much about and we found who in our team did know and had a conversation with them. It’s helped us with confidence in asking questions and admitting we don’t know everything. We have also been continuously peer reviewing each other. The surprising part has been realising that we enjoy the performance side of presenting, and the fact that we come from an organisation full of professional presenters made us feel we had to work hard at it!

What advice would you give to other developers who are thinking about speaking at a conference for the first time?

Prepare, get support (buy in from your work if you can!), start small like a lightning talk. Talk to experienced presenters. Ask for feedback, as it will help you grow. It is a process so set yourself achievable goals on what is a good first talk.