SESSION: SAIL IN THE CLOUD – AN INTRO TO ISTIO 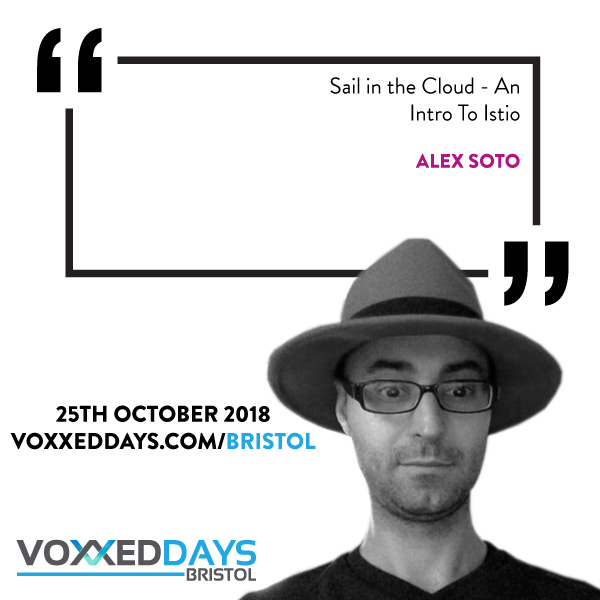 Alex is a Software Engineer at Red Hat in Developers group. He is a passionate about Java world, software automation and he believes in the open source software model.

Alex is the creator of NoSQLUnit project, member of JSR374 (Java API for JSON Processing) Expert Group, the co-author of Testing Java Microservices book for Manning and contributor of several open source projects. A Java Champion since 2017 and international speaker, he have talked about new testing techniques for microservices, continuous delivery in 21st century.

Can you tell us about yourself and how you became a developer?

My name is Alex, I work in Red Hat and I am a Java Champion. I cannot remember how I become a developer when I was 7 or 8 my parents bought me a ZX Spectrum and I started there to copy programs in Basic from Magazines to the computer. Then for curiosity, I started doing some modifications on them to see the final result. Step by step I started by not modifying the copied programs but creating them from 0. And the rest is well known, 80286, 80386 and so on to learn other languages like C and later on Java.

What was the inspiration for your session about Microservices and Istio?

Well, the inspiration came from how Istio simplifies cross-cutting concerns of network communication between services. When you see how powerful and transparent are able to apply some patterns such as circuit breaker or securing the communication without developing any new code inside the service, then you realize that Istio (and service meshes) are totally necessary for (micro)services architectures.

Istio has become a real tech-du-jour, why do you think it’s getting such a following?

In my opinion, Istio is becoming really popular nowadays because it is like AOP we had in programming languages but at the infrastructure level. So you can think about as aspect programming for networking. This makes that you as a developer can focus on developing business features, and not worry about the network, you can skip for example implementing circuit breaker on your code, or having to configure your services with mTLS manually with all efforts it means with certificates, private keys, CAs, … All these things among other ones are managed automatically by Istio. So you only need to configure them but not adding on your code.

Who should attend your session and what will the learn?

Mainly developers who are into DevOps movement.

What kind of innovation do you hope we’ll see in the Microservices space over the next 12 months?

This is my personal opinion and I know that there can be some controversy, but I see that microservices in the next 12 or 24 months are not going to be the widely accepted architecture anymore (of course it will continue existing and there will be companies which will use it since they fix their problems very well and they have the skills to make them work correctly) but for the rest I think there will be a mutation. Mutate to something like microliths (your application would not be tenths of services but just 4 or 5 services) + serverless architecture or (FaaS).