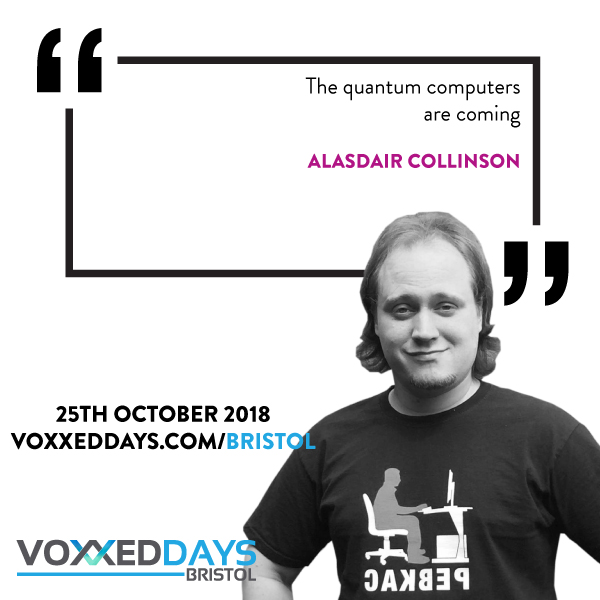 SESSION: THE QUANTUM COMPUTERS ARE COMING

A professional software developer by day, a nerd… Well, all the time, really. I love programming, I also love talking and thinking about programming. I’m fascinated by the culture surrounding programming and I immerse myself in that culture. And I like sharing what I have learned. I’ve spoken at conferences several times before about a range of different topics – some of them very technical, some of them less so. Mixing it up, that keeps it interesting for both me and my audience. Anyway, you can be sure that everything I talk about is something that I’m really passionate about.

Tell us a bit about your background.

I studied Computer Sciences at the University of Bonn and have worked as a Software Developer at Senacor Technologies, an IT Consultancy, for about 5 years now. I have no formal background in physics, so have had to learn all the quantum physics I need for my subject in my spare time. When not speaking at conferences or learning about quantum mechanics, my job is to build custom software for our customers, helping them to stay relevant and effective in an ever more digital world. Also I am a nerd who loves adventure games, superhero movies and science jokes.

How did you get into software development?

I’ve always been fascinated by technology and my parents supported me in this fascination. I first started programming in about 1998/1999. Initially in Basic since I could easily get my hands on a Basic compiler – my parents had an old BBC Micro which I could experiment on. I started using Java not long after, though, and have used Java as one of my main languages ever since.

You’re talking about Quantum Computers. Is that way, way out there in the future for the regular developer amongst us?

Real life quantum computing is still in its early days (the theory has been around for decades), but it is moving quickly at the moment. The number of qubits in a single computer has been rising faster than Moores Law in the last couple of years (though this is sure to slow down) and even today anyone interested can start working with quantum computers. There are already companies who aren’t building their own quantum computers but are exploring uses in their respective fields (e.g. Volkswagen and Lockheed Martin).

What will people attending this session takeaway from it?

My session is aimed at giving people who have no or little experience in quantum mechanics an introduction into quantum computing. That means that I’ll show the audience why the topic is both relevant and fascinating and I’ll give them enough information and resources to get started with quantum software development right now – using real life quantum computers.

Would you share one prediction you think will impact software developers in the near future?

Relevant to my talk, my prediction is that within 5 years quantum computing will become a major topic in commercial software development; there are already some industry jobs in the field and more are sure to come. Learning about the topic now gives all of us a head start.